Axel was also rated “Pronounced” for his courage and hardness.

The National was hosted by the Eagle Heights Sportdog club Inc. Melbourne, Victoria on the 6th – 7th – 8th June, 2003.

Von Forell Vilco‘s dam was our brood bitch Von Forell Pamela, who in turn is the daughter of Gento v. Haus Larwin. 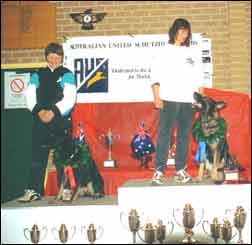 Von Forell Dores is full sister to our stud male Von Forell Borg. Another interesting think to note is that Dores is also a 3/4 sister to Von Forell Vilco through their sire Kuran van Tiekerhook and maternal grand mother Buennen Katrina.

Von Forell Dores dam was our brood bitch Von Forell Rena, who in turn is the daughter of Natan v. Busecker Schloss. Press Release: Natan V Busecker Schloss (24 year old breeding) sired four puppies on the 28th of October 2010. The puppies have been placed strategically to assit with our National Breeding Program. 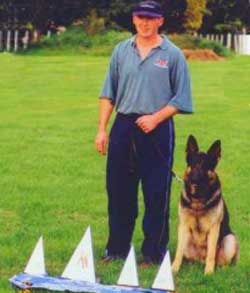 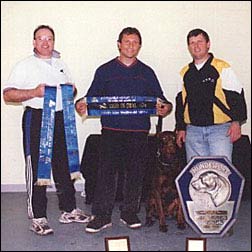 The judge’s critique included comments praising Baron’s track sureness, precision at the turns and his accurate indications of the articles on the day with a score of 100 points.

New Tracking Book – ‘How To Achieve Precision Tracking With Your Dog’

Personal Advice:
By telephone, e-mail, or at our facilities, our specialists will answer any questions whatever they may be, and guide you in your choice of products and services.